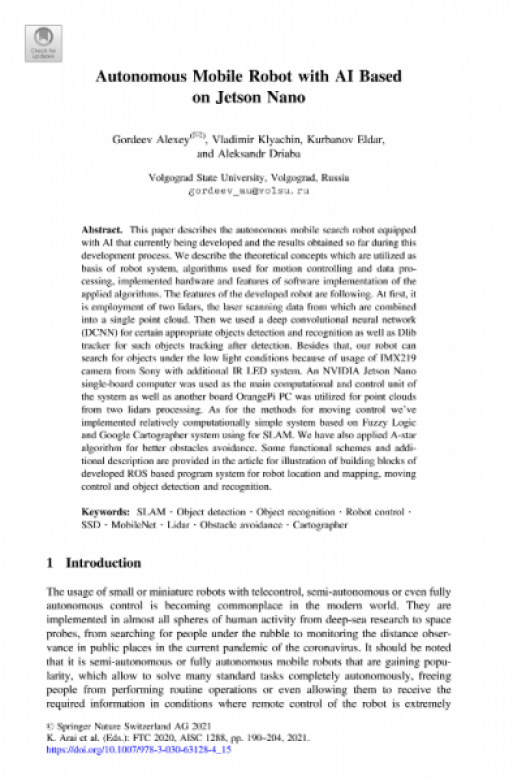 This paper describes the autonomous mobile search robot equipped with AI that currently being developed and the results obtained so far during this development process. We describe the theoretical concepts which are utilized as basis of robot system, algorithms used for motion controlling and data processing, implemented hardware and features of software implementation of the applied algorithms. The features of the developed robot are following. At first, it is employment of two lidars, the laser scanning data from which are combined into a single point cloud. Then we used a deep convolutional neural network (DCNN) for certain appropriate objects detection and recognition as well as Dlib tracker for such objects tracking after detection. Besides that, our robot can search for objects under the low light conditions because of usage of IMX219 camera from Sony with additional IR LED system. An NVIDIA Jetson Nano single-board computer was used as the main computational and control unit of the system as well as another board OrangePi PC was utilized for point clouds from two lidars processing. As for the methods for moving control we’ve implemented relatively computationally simple system based on Fuzzy Logic and Google Cartographer system using for SLAM. We have also applied A-star algorithm for better obstacles avoidance. Some functional schemes and additional description are provided in the article for illustration of building blocks of developed ROS based program system for robot location and mapping, moving control and object detection and recognition.